skip to main | skip to sidebar

THE REAL ESTATE SERVICE ACT of the PHILIPPINES

STATUS of the AIPO and ELECTIONS

STATUS of the AIPO and ELECTIONS
Last March 28, 2012, a meeting was held by the Committee on Civil Service and Professional Regulation of the House of Representatives [ Congress ] for the initial deliberation on House Resolution No. 2149 to look into the matter relating to the accreditation and integration of real estate service associations into one National Organization as mandated under Section 34 of RA 9646, authored by Rep. Rodolfo G. Valencia.
Based on information received, various sectors, such as PRC, PRBRES, national associations were present and gave their position as to how the AIPO should be formed.  Primarily, the questions rests on whether it is an integration of national real estate service associations or individuals.
As such, the Committee ended the meeting by stating that it will come out with its resolution/decision on the matter after hearing the various points of views, which is still expected to be sometime May 2012.
It is therefore evident that the planned elections and even deadline which is being imposed by the Philres, will have to be held in abeyance pending the resolution of the Committee given that the resolution is still expected sometime May 2012 and the planned AIPO Elections has been announced by Philres to be on May 19, 2012, in order to give due respect for the resolution/decision of the Congressional Committee.
Below is the full text of House Resolution No. 2149.
__________________________________________________________ 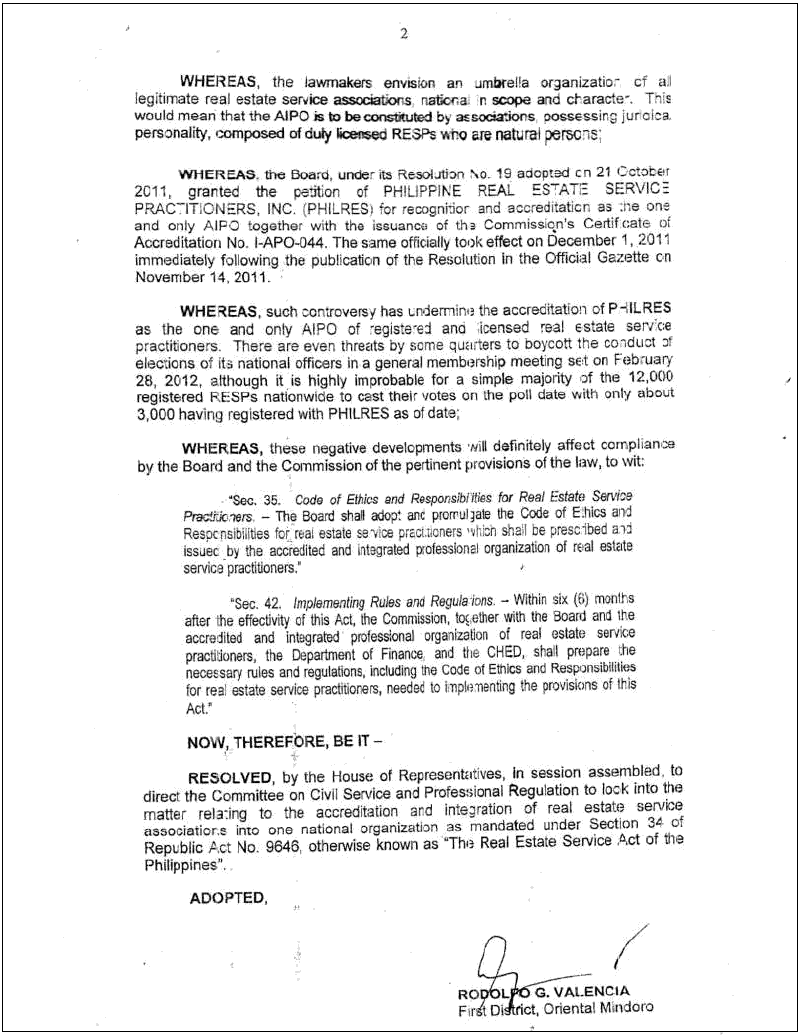 UPDATE ON RESA & IRR and Other News

The Real Estate Service Act of the Philippines, RA 9646 is valid and constitutional

Proclamation No. 487 Declaring 3rd Week of October of every year as "Philippine Professionals Competitiveness Week"

Status of the AIPO and ELECTIONS April 2012

Implementing Rules and Regulations of
Republic Act No. 9646 [ IRR ]

Status of AIPO and Elections

Industry prepares for professionalization
[ Creation of the RESA Board ]

NOMINEES to the REAL ESTATE BOARD